To those that follow this website, it has been another entire year since I last posted anything on this website. In a way, I feel as though I owe an apology to those who use blogs and websites as their main means of staying updated with an author. To those who look to the site for updates, I apologize.

I haven’t been utilizing the blog aspect of my web site since I first set it up alongside the release of NANO Archive 01: The City of Fire. Occasionally I posted something for a while, but eventually the time between posts grew longer until it was nearly a year in between posts!

First, I would like to assure you that neither the web site nor my endeavors in writing have been abandoned or anything. In fact, the primary reason for an absence in these posts is because I am usually working rigorously on my projects. Not to say I don’t have time, because that’s bullocks… it’s more a sense of absent-mindedness. When I work, I get absorbed into it, and when I’m not working, I’m either spending time with the people close to me so they don’t think I’ve abandoned them (which they most assuredly otherwise would because I may very well be a mad man consumed by his passion) or … thinking about working. So I put off posting things. “I’ll do it next week when I actually have some progress to report,” I say to myself every time.

You see where this has gotten me.

However! I do have plans to utilize my website as a more active blog in the future. I’d like to wait until I finish fully publishing the NANO series. When I do that, I’m going to be taking a little time to explore marketing both locally and online. That’ll include things like joint blog tours and other things. Depending on popular intrigue, I may also do something with my blog such as an indie author book review or something. The point is, I paid my subscription for this site again this year ‘cuz I plan to use it. Just… working everything out.

On that note, actually! The “update” part of my title! NANO Archive 03: The Fate of Bliss (Part I) is ready to publish. It’s been ready for nearly a year now, but I’ve waited to publish it until I finished up Part II. I did this so I could release the books close to the same time. Since it’s a part I and II, I didn’t want to release part I then leave my readers hanging for almost a year while I went through the whole process with part II. As it stands, part II is now formatted, preliminary edits are done, and it’s out on beta read!

What does this mean? Well, in a few weeks when the beta read comes back and I assess comments and questions, I will enter the main and final editing phases. This should last a few weeks to a month depending on the extent of changes based on the beta read… or the number of times I accidentally used “effect” when I meant “affect” (my editor hates that one.) While the last of the editing and tidying up is going on, I will publish Archive 03: Part I. This will give my readers a few weeks to chow down on part I, and hopefully by the time the majority of readers start finishing part I, part II will be ready for release! That’s my plan, anyway!

In addition to NANO, you may be surprised to see a link to a story called Cloud IX here pretty soon! Book 1 is finished and awaiting editing, and book 2 is nearly completed. Once I finish the editing and beta reading for the two Cloud IX books, I will be releasing both of them at the same time. My current price plan for this series (given that they will be novellas/short novels compared to the lengthier NANO) is to release the first book free and the subsequent books for $0.99. Keep an eye out for those, as well!

Once the tab to the left has a “Plot Description” and “Excerpt” link for all 4 of my books along with links to books 1 and 2 of Cloud IX, I will be using this website a lot more frequently as a blog while I explore marketing options. Until then, I am just intensely focused upon reaching this milestone — my full, 4-book science fiction series published, and the start of my next series published. I’ll be able to start gauging interest in my work then; that way I can find out what’s working, what’s not, and adjust my grasp of the craft accordingly.

I have plans for about 10 light novels/novellas for the Cloud IX series, and I have plans for The Dawn Maiden (the sequel series to NANO). Then again, I have ideas for things completely unrelated, too. What I work on will largely depend on how my work is being received! Keep your eyes peeled for updates as I figure out the road I need to walk!

Thank you all so much for everything you’ve done. I wouldn’t be here on the brink of this personal achievement if not for all the support I’ve received over the years. I love being able to share my stories with everyone, and I hope you always enjoy reading them as much as I enjoy writing them.

Thank you so much for your continued support. 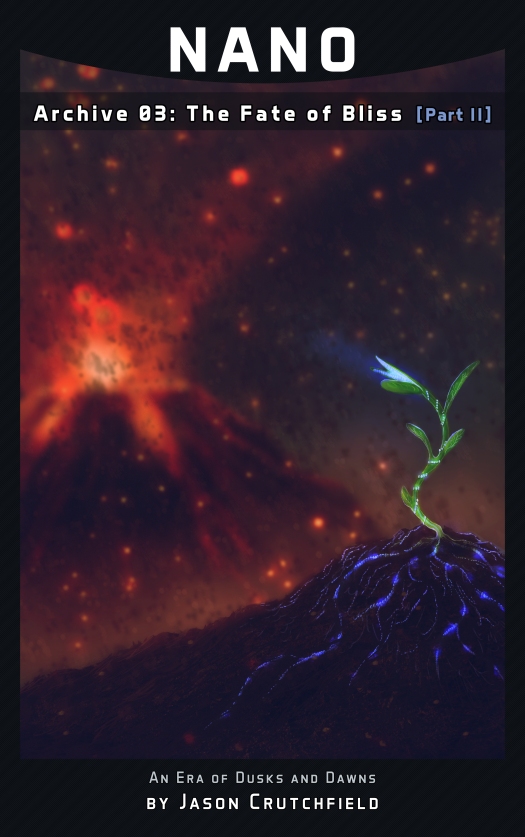